or maybe you are just churning through a bunch of these.  no matter.  still talking about stuff that happened way in the early days of skullheadworld.

one of the greatest joys of making a videogame can be prototyping new ideas.  here is the earliest image i could find of the skull shield prototype.  hit a button and whammo!  a huge amount of little skulls pop out and protect you.  they were called skully bubs.

pretty neat! so then i made two types, one that causes damage and one that slows down your enemies. 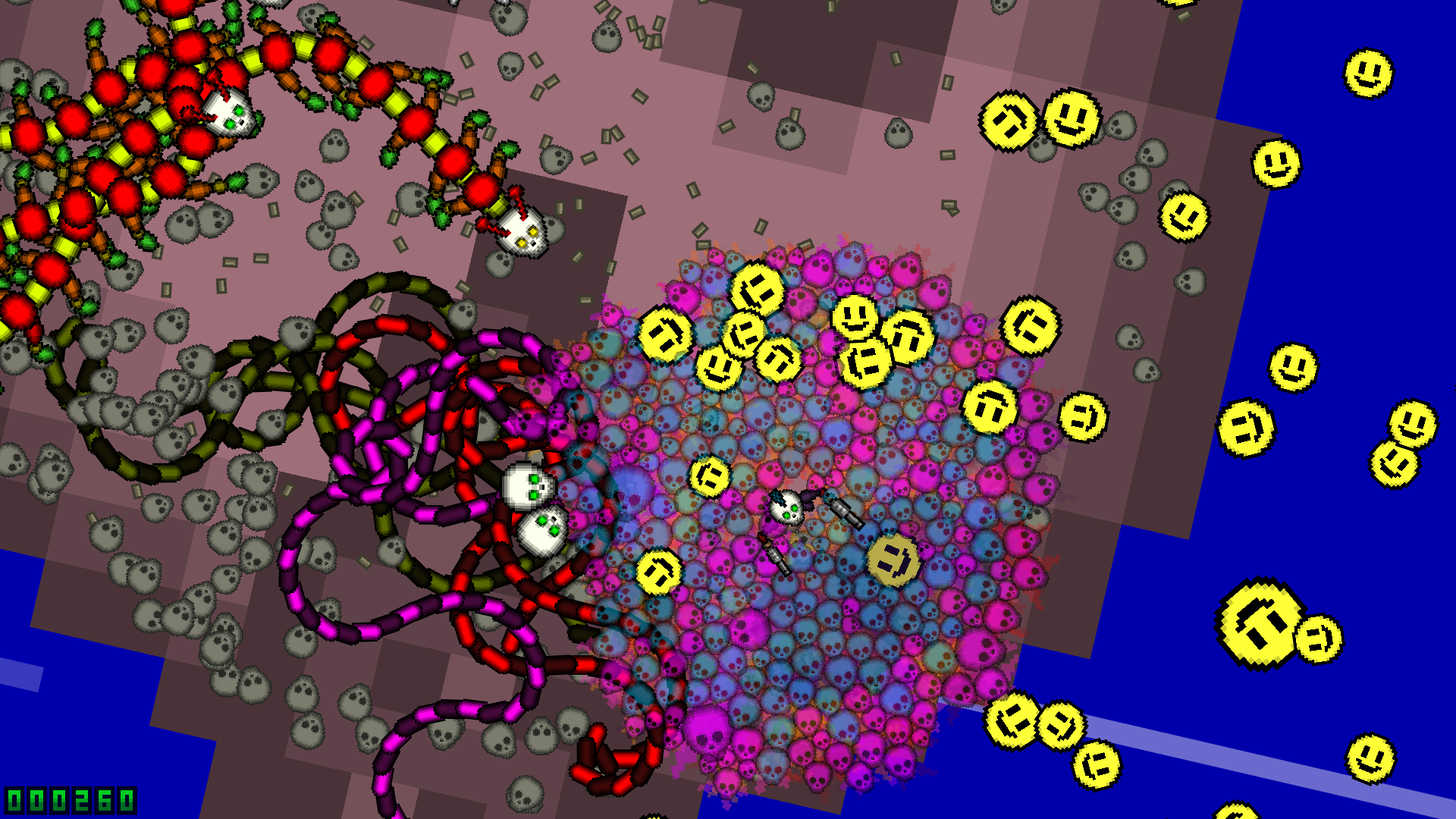 there were a lot of problems with them- first of all, they were way too effective.  like a you win button.  not very fun.  they also caused collision, performance and even control issues.  i also did not want any extra buttons in the game.  so the spawn-on-demand idea was canned pretty quick.  but they did show me that having a bunch of skully bubs orbiting you can be pretty satisfying.

i probably should not show you this next one, because i am worried that it looks cooler than how they are rendered right now. 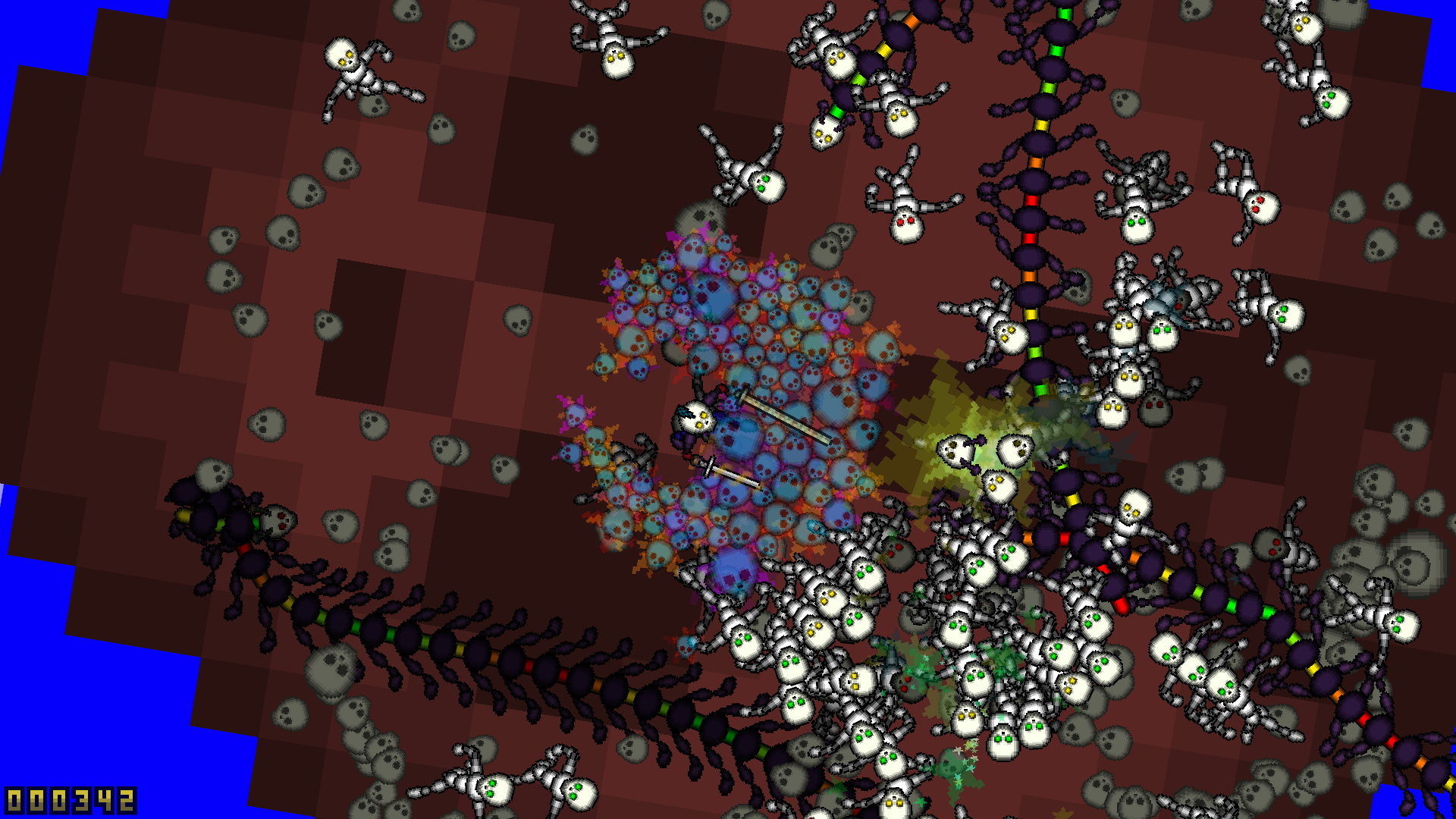 each bub had 2 stars underneath it, rotating in opposite directions, each morphing colours between purple and orange.  the bub itself was fading between a cyan and a blue, picking up the red from the stars behind it.

looked pretty rad, but this was all nested transforms and using the standard unity sprite renderer and shader.  which unfortunately was quite slow to update and render due to bottlenecks with the method i was using in unity -and so the two stars behind the bubs were lost to the optimization monsters. 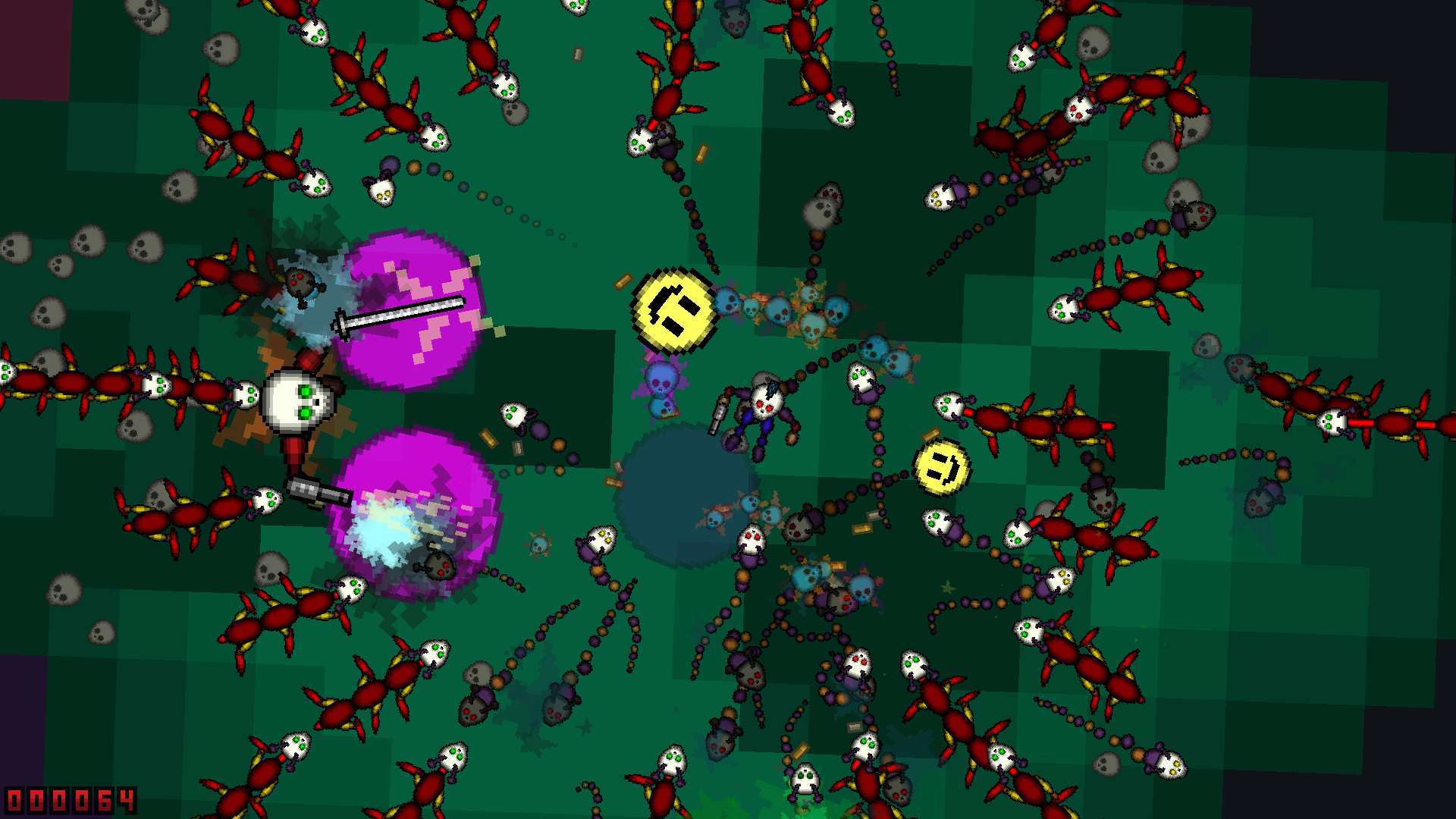 here you can see one of the first rough appearances of the first boss in the game.  also you can see that the skully bubs no longer spawn around the player, they have to be collected from downed foes.

for a very brief time the player started the game with no weapons. when you collected enough skully bubs they would disappear and a new weapon would fall out of the sky.  it was weird, hard and disorienting.  i was still thinking tough-as-hell roguelike at this point.  and the weapons still seriously sucked.  they weren't good.

swords were kinda-but-not-really ok, did not physically interact with the world and guns did not have projectiles yet.  you would often get hit by enemies passing right through your weapons.  at this point, it was just a circlecast right where the highlight circle indicated, once a frame.  not a very robust solution.  eventually it became capsule casts that stretched from the previous frame to the current which missed less, but also sucked for gameplay reasons.  now it's all different, but i am getting ahead of myself. 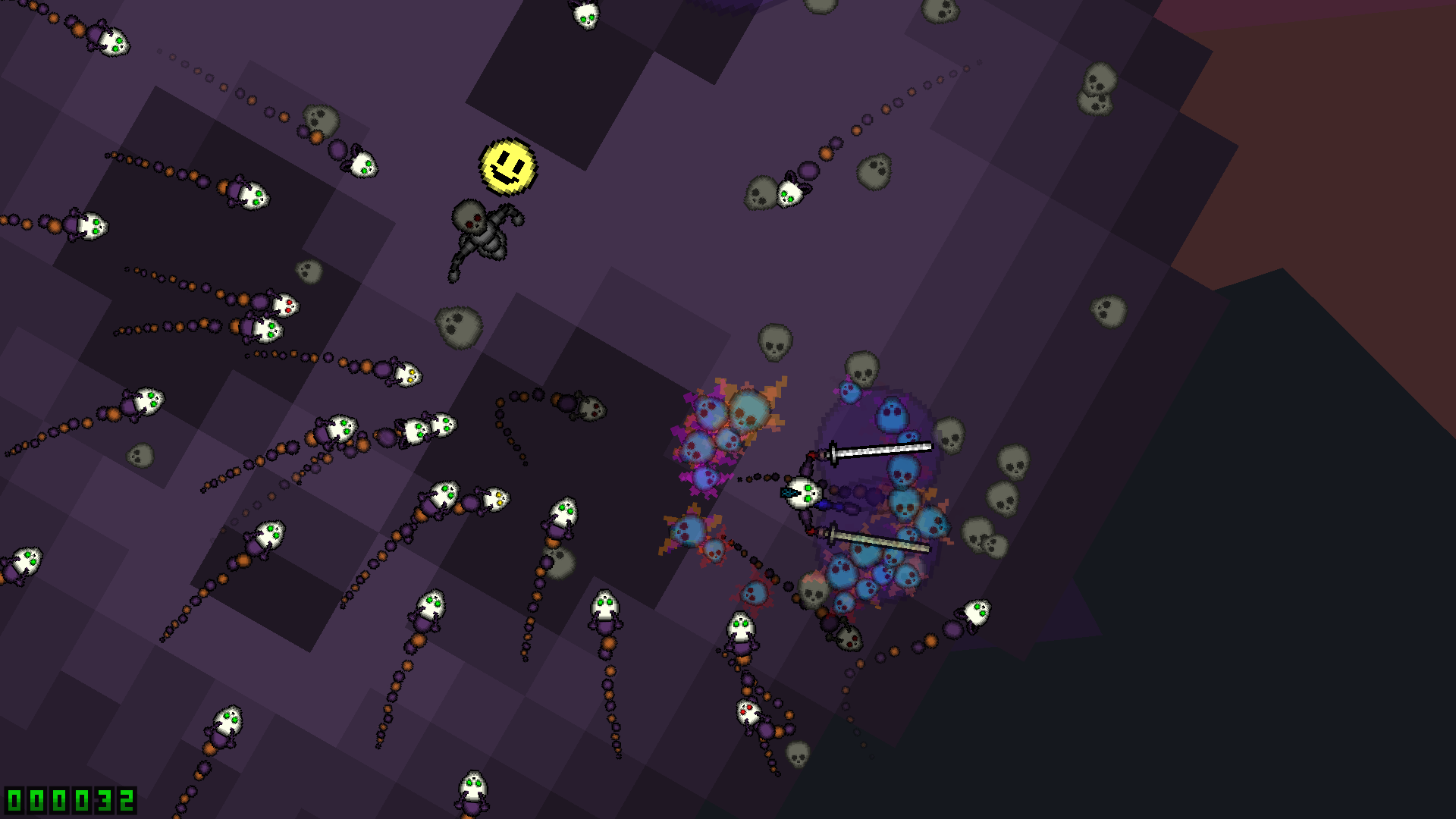 bubs were pushed out away from the player to not crowd so much.  this played a lot better.

as mentioned above, weapons were circle collider triggers indicated by the purple circles. they didn't physically react to things, but they did apply forces to things that passed through them.  and as you swung your arm around the circle would move, so targeting was pretty erratic.  you would leave yourself open often.  this also has changed, now targetting areas are fixed to the player body and not the arms.  which makes gameplay way more predictable and less controller smashy. 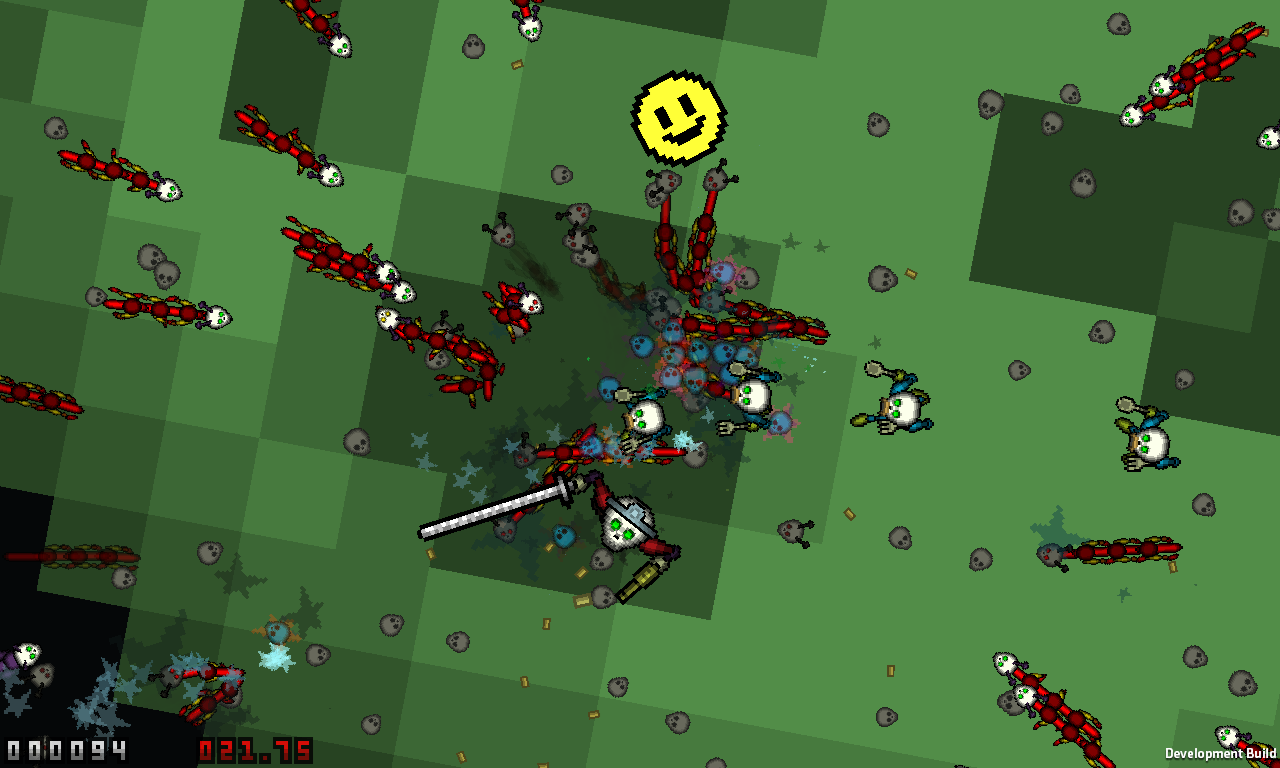 characters were starting to develop at this time too.  hungry ghost chaser has a bigger mustache now, but otherwise not too much different.  evil skullhead is much improved from a few shots ago. 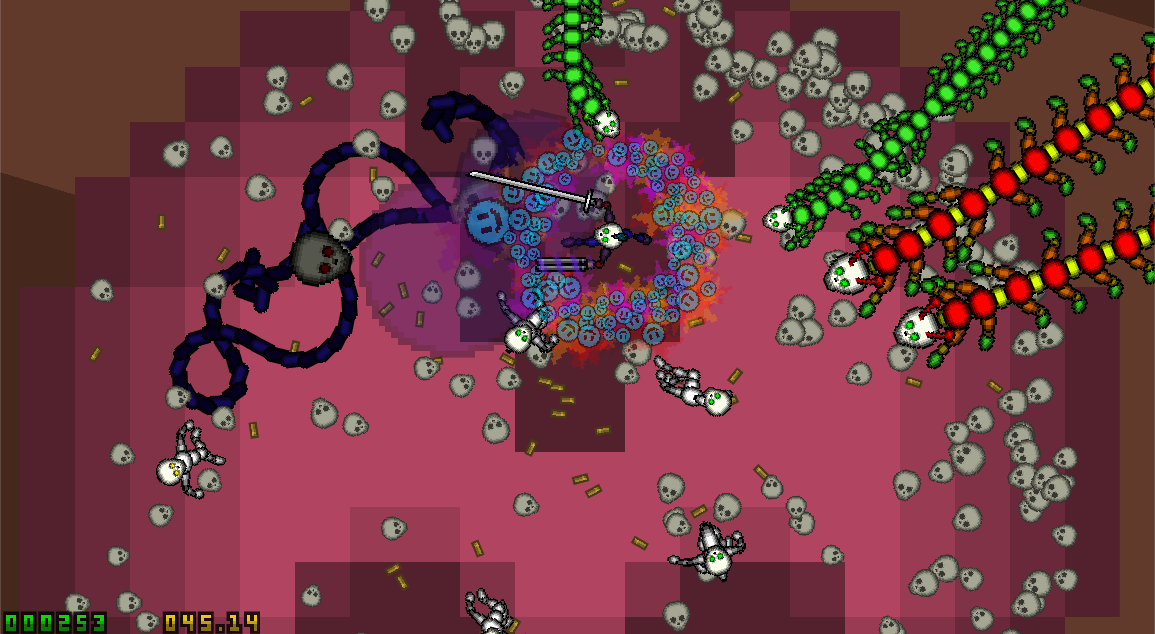 early builds had very long and dramatic fade outs on defeated enemies.  i thought it looked cool but gameplay tests proved that it was very distracting.

and here is the shortlived happiness field of joy and wellbeing.  be happy!  thanks for reading!